In the “Class of …” series, Nick Rogers takes a monthly look back at films celebrating either their 20th or 30th anniversary of initial release this year — six from 1997 and seven from 1987 (the extra in a forthcoming double-feature column). The rules: No Oscar nominees and no films that were among either year’s top-10 box-office grossers.

Jeff Taylor is a weenie. You suspect he found a polo shirt fit to his liking — up a size to plan ahead for paunch — and bought a color for each day of the week. Shades tucked into the placket, of course, at all times. He’s a man without swagger, just Haggar, and the pleats in those slacks are the only creased thing about him. Were Jeff alive in an era of portable cell phones, he’d proudly holster one on his belt. Even in 2017.

This sounds like the last believable character you’d expect from the guy who played shit-talking Snake Plissken, alien-torching R.J. MacReady, day-saving “Bull” McCaffrey, hell-raising Gabriel Cash, justice-dispensing Wyatt Earp, or even bravado-blurting Jack Burton. But Kurt Russell embodies palpable powerlessness as the hero of 1997’s Breakdown. Jeff never finds keys in the visor for a miraculous getaway. Hotwiring a car? Yeah, right. And like anyone else who has never fired a gun in his life, whatever firepower he eventually brandishes is purely symbolic. Through Jeff, Breakdown lets Russell skillfully subvert his continually iconic badassery (to a point, anyway, as Russell is clearly doing some of this film’s stunts on his own). At the time, the movie’s streamlined, snub-nosed and surgically precise suspense certainly seemed like a shinier calling card for director Jonathan Mostow than it turned out to be.

In six years, Mostow went from nary a computer-generated sight to reviving the Terminator saga with mixed results. His skill for vehicular mayhem in Breakdown’s conclusion was writ large in the best sequence of Terminator 3: Rise of the Machines” — an otherwise indifferent continuation of a franchise that should’ve stopped at two. Then, in 2009, a surprisingly robust Bruce Willis sci-fi parable. After that? Movie jail. (Yes, he has a new movie: Hunter Killer with Sam Worthington. That’s just a VOD furlough, folks.)

But Breakdown remains an unnerving corker, the sort of low-and-slow simmer that Blumhouse might now push into 1,000 theaters at best. The story is simple: The Jeep belonging to Jeff and Amy (Kathleen Quinlan) suspiciously fritzes in the desert heat, Amy hitches a ride with a trucker named Red to get a tow and … poof. Gone. No one in town has seen her. And when Jeff catches up with Red and confronts him, he insists he’s never seen them before. Even the earnest country music in a depressing diner seems like it’s assailing Jeff.

Remember that polo shirt? It’s so big on Jeff you can see the desert air billowing through it. Later, he’s made to don a jacket so oversized you expect him to start waxing metaphysical a la “Once in a Lifetime.” Mostow does a great job of rendering Russell visibly, and metaphorically, small. Plus, Moab — the Utah location where Breakdown was filmed — has doubled for Mars before, and the film’s heavy-orange tint certainly transforms the terrain into something unfamiliar and unsparing for Jeff.

You may be wondering what kind of husband lets his wife go off with a complete stranger in the middle of nowhere. Certainly not a smart one. As Jeff finds himself in over his head, Russell works up such a lather of incredulity and impotence so inherent to this character that Mostow understands: He might survive, but he won’t be delivering a triumphant blow, let alone a satisfying fatal one, to his tormentors. Anyone who watched any 1990s thriller knows Red is bad from the jump, as he’s played by the evilly estimable J.T. Walsh — whom Playboy once called “everyone’s favorite scumbag.” Indispensable in his heyday, Walsh is a textbook That Guy. You may not recall his name, but you’ll always remember his snarling and sneering as a bevy of bureaucratic blowhards and bad-dude Bubbas: Backdraft, A Few Good Men, Needful Things, Executive Decision, The Negotiator. Hell, even light fantasies like Pleasantville — Walsh’s final work before a 1998 heart attack — cast him as the personification of halted social progress. 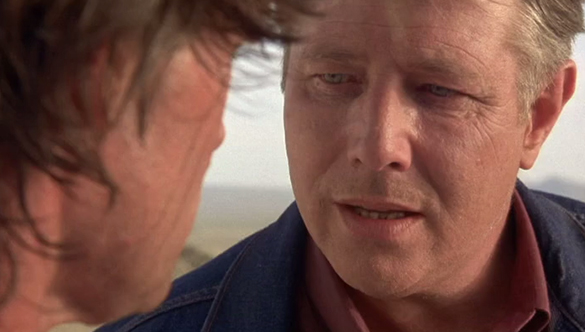 Just as Mostow helps Russell find a different gear, he does the same for Walsh. For all of Walsh’s memorably withering menace, he rarely played the ringleader. More regularly, his characters served as willful tools of some long-institutionalized blight. But this? All Red’s show, and he’s a rotten sonofabitch. “She’s about 5’5 … 115 pounds, three or four of that pure tit. Nice, curly brown hair upstairs and down,” Red taunts Jeff in the second act. In Walsh’s mouth, leering crudity transforms into a knife cruelly twisted above Jeff’s last nerve — a sharp blade drawn to make Jeff act quickly, and compliantly, on a $90,000 ransom Red demands in exchange for Amy’s life. (Spoiler: Jeff doesn’t even have 10% of that.) Red also nicks away at Jeff’s masculine insecurities even when Jeff thinks he’s a pal, starting with his passive-aggressive insinuation that Jeff was pushing the car too hard in the hills and valleys.

In Red, Walsh creates his career’s finest villain — one of equally formidable vigilance and violence, of the physical and verbal kind. Red, or his dastardly deputized eyes and ears, seem to be everywhere, from mullet-sporting counter jockeys to milquetoast businessmen. In a pivotal third act moment, he even seems to have weaponized his own young son. It’s a role so good you don’t care about typecasting or concern yourself with how a guy who has kidnapped people for years grows so patient to wait around when a cohort of his goes missing.

Said cohort is Red’s right-hand shit-kicker, Earl — played by the imposing slab of tough, leathery beef known as M.C. Gainey. Likewise, you may not know him, but you recognize his psychotic glare and believable threats from Con Air, ABC’s LOST or Django Unchained. Gainey was an undertaker’s apprentice before he took up acting. He could just as easily have been the Undertaker’s apprentice.

Mostow indulges shell-game fun, too, with which (if any) of the other familiar faces — Jack McGee’s short-tempered short-order cook or Rex Linn’s conveniently arriving cop — are conspirators in Red’s plan. That there remains, at this point, not much more to say about Breakdown is one of its chief pleasures. Sometimes a tightly wound watch — with a little bit of filigree and flourish to set it apart — is all you need.